Essentially, this presentation is going to come down to one question: Why should you use plastics? or phrased differently, How could you use plastics?
Is the strength suitable? Will it stretch? What does the final shape need to be? Do you have the tools? Will the part be abraded? Are there unconventional features that you need to have? 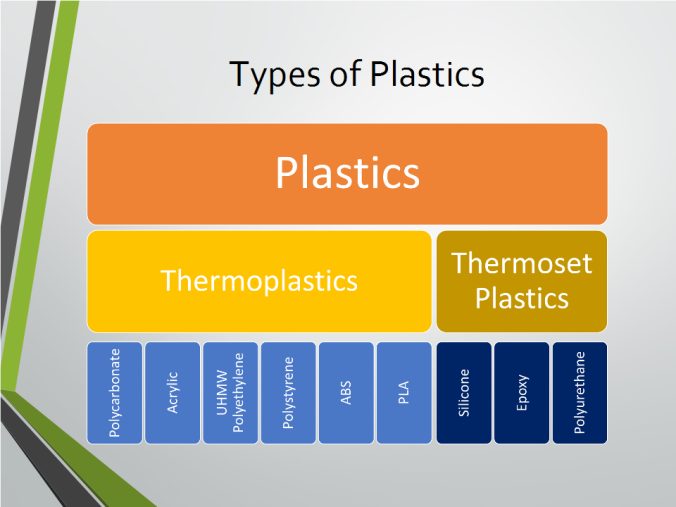 Even though they’re all lumped together as “plastics” different plastic material can have wildly different properties and it’s important to understand those differences so you can pick the right material for the job. At the highest level, plastics can be separated into two groups by the methods that you can use to work them. The first group, thermoplastics will get soft when heated and harden when cooled and this process is repeatable many times. Thermoplastics are often sold in blocks, sheets, tubes, and rods because they are ready to work in their solid form. Thermoset plastics on the other hand, can’t be heated to be worked after their initial forming. They are sold in a liquid or gel form with a matching hardener or that harden by some other means (UV light, exposure to moisture in the air, etc).
Each of those categories has a wide spectrum of plastics with a varied array of properties to choose from. I’ve listed some of the ones I’m going to talk about today.
I’m going to focus mostly on thermoplastics because of their availability and usefulness in robot-building.

How do you know if plastic will do the job as a structure? To know the answer to that question, we can use ultimate tensile strength (write on board) which is the stress at which the part will break. Tensile stress is like the opposite of pressure. When you pull the two ends of a piece apart, the force is distributed over the cross-section of the part and if you apply enough force, the part will break and that’s where the ultimate part comes in. We can use that property to compare different materials to each other. Also, in robotics, weight is your enemy, so I charted the ultimate tensile strength against density so you could have a general idea of how these plastics might perform compared to each other.
For example, UHMW has a strength of about 20MPa and very low density, meaning it’s very light weight. Polyethylene has about the same strength, but a much higher density. You’ll also notice that this distribution is about linear where the heavier the material is, the stronger it is, but that’s not always the case. Some special varieties may have additives that make them stronger or lighter. You can see ABS, Acrylic, Polycarbonate, and PLA.
Now, I’m sure the 3D printers among you are probably looking at this chart and saying “Wait, that’s not right. ABS is stronger than PLA!” But what’s happening here is that PLA IS in fact stronger than ABS if you apply an even, slowly applied force, but PLA is BRITTLE, so it can’t take a beating like ABS can. What I mean is that PLA will break easier if a sudden impulse force is applied.
Also, for comparison:
Aluminum: Density 2.7g/cm³, 80MPa to 570MPa, depending on alloy type. If you buy aluminum at the hardware store, I wouldn’t assume higher than 80MPa. 6061-T6 (aircraft-grade aluminum) has the best properties and is very expensive.
Structural Steel: Density 8.08g/cm³, 400-550MPa. Steels like Chromoly can be stronger than 670MPa.

You may or may not have heard about the strong axis and the weak axis regarding 3D printed parts. If you haven’t, the general idea is this: 3D printed parts act like composites, even though it’s all made of the same material, it can be weaker if pulled in one direction than another direction. This phenomenon can be attributed to the bonding strength between printed layers and the difference in cross-section between slices in different directions.
Consider this example of a 1” cube cross-section of a printing with ¼” beads which I’ve drawn as rounded squares. I realize the proportions aren’t realistic. If you calculate the cross-sectional area between layers (xy), in my example, you’ll find that the rounded corners take about ½ of each square. If you multiply that by the 1” length, you’ll end up with 0.5in² or about 50% of the possible 1×1.
If you do the same with the cross section at the end where we’ve cut it out of the part, you’ll find that the rounded corners only take (4-pi)/32 from each bead, leaving a cross-sectional area of 0.94in² or 94%, nearly double the area between layers!
So in this example, if you pull the cube from the top and bottom as shown (or side from side), the part will break under about half the force required for the axis into and out of the board.
Since FDM printed parts are printed as whole perimeters, the actual cross-section through the whole part will vary significantly with most regions having combinations of cross sections like these and others where layers are stacked up so the strength will be somewhere between the 94% and 50%. For certain, though the strength in the z-axis will be less than any other axis of the part.

While we’re on the topic of 3D printers, I wanted to write for a minute about a problem that FDM printers have called heat creep that happens in the hot end. Also if you’ve printed with ABS and PLA, you may have noticed that it’s more of a problem with PLA than ABS, but why? The answer is the glass transition temperatures of the two plastics. The glass transition temperature refers to the temperature where the plastic becomes rubbery and flexible, but isn’t yet a melted liquid. Before I get to why that’s important, let me start off by explaining the major parts of the extruder:

Generally, you’d use the same extruder for both PLA and ABS, so both plastics will be subject to the same basic principles.
For PLA, generally you can print near 180°C and with ABS, you can print near 220°C. Most of the time when you’re printing perimeters or the first few layers, the filament remains solid in the tube because the combination of ambient cooling and incoming filament keep everything just perfect. But some of the time when you aren’t consuming that much filament, the filament in the tube will heat up and the rubbery filament can get deformed and jam, then the mover just spins and hogs out this nice simicircle right here and you get to spend a couple hours cleaning up the mess. This problem is more prevalent with PLA because the glass transition temperature is so much lower that it happens more easily than with ABS.

here are lots of other ways that plastics can be used. For example:
If you needed a plain bearing material or a non-marking material for bumpers, you might use UHMW because it has high abrasion resistance even though it’s quite soft and bad for structural parts.
Or if you needed a cover for your circuit boards, you might use sheets of styrene, ABS, acrylic, or polycarbonate because they can be heated and formed to any shape.
Everyone knows if you want a part that can’t otherwise be machined, go with a 3D printer which most commonly use ABS or PLA plastic
Another lesser-known use for 3D printer filament is as a rivet material. Basically you mushroom one end using a heat source like a heat gun or soldering iron and then, push the filament through your parts and mushroom the other end. 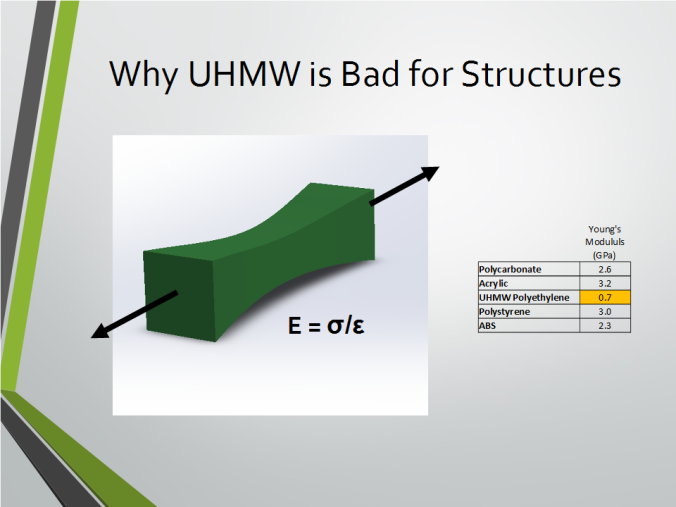 Earlier, I mentioned that UHMW was  a good bearing material, but wasn’t good for structures, but why is that? The answer comes down to one number: Young’s Modulus. Earlier, we were talking about stress which is the expression of force distributed over the cross-section of the material. Strain is another related reaction of material to forces. Strain is the measure of how much a material stretches. Young’s Modulus is just the ratio of stress and strain. UHMW has extremely low Young’s modulus meaning that when UHMW is under stress (pulled apart) it changes it’s length drastically. Clearly, such a material would make flimsy structures.

In general, wood-cutting tools will work with most thermoplastics and thermoset plastics. You’ll need to be careful when working with brittle materials like acrylic. Acrylic may chip and shatter if the tool is too aggressive or catches. In those cases, it’s best to take a little at a time by using tools like razorknives that cut slowly or step drills that slowly widen a large hole. It often helps to prevent chipping by using a backing material like a scrap piece of wood. That prevents blowout which chips the material.
When drilling or cutting with power tools, there’s a relationship between the speed of your tool and the amount of pressure you apply. You’ll want to avoid running the tool too fast and overheating your plastic, possibly melting it or, on the other extreme forcing too much material into your tool, causing the plastic to chip or crack. The ideal zone will grow or shrink with different materials. For example, with acrylic because it’s so brittle, the ideal zone will be very small. ABS, Styrene, and Polycarbonate are much more forgiving and you can just tear through UHMW because it cuts like butter.

Some techniques you might not be familiar with are general heat forming where you apply heat to a specific area of the plastic and bend it into a shape and let it cool. For example turning a strip of acrylic into a 90° angle bracket.

Vacuum forming is a more advanced version of heat forming where you heat a sheet of thermoplastic, then stretch it across an object and use a vacuum to suck the air out, forming the part. This is not as hard as it sounds, but generally takes a few tries to get it just right.